Today is the first day of the pre-season testing for 2017 formula one season. I am very excited about the 2017 season. The new regulations are expected to make the cars go faster. One of the criticisms for the hybrid era formula one races have been the lack of excitement. Faster cars are definitely going to make this sport very exciting indeed.

Along with car changes there is also a change in driver lineup. Last year’s world champion: Nico Rosberg retired from the sports. To fill-in his spot is Finnish driver Valtteri Bottas. Bottas moved from Williams-Martini Racing, a Mercedes powered team, to the factory team. Lewis Hamilton is the veteran driver for the team. I am expecting Hamilton to be faster of the two. Unlike last year, I also hope Hamilton to have a better luck with reliability. Mercedes AMG Petronas have made some significant changes to the 2017 car.

This video below explains all the regulation changes in place for 2017 season.

Here are my thoughts on some of the interesting details I found out about the Mercedes AMG Petronas W08 2017 car. 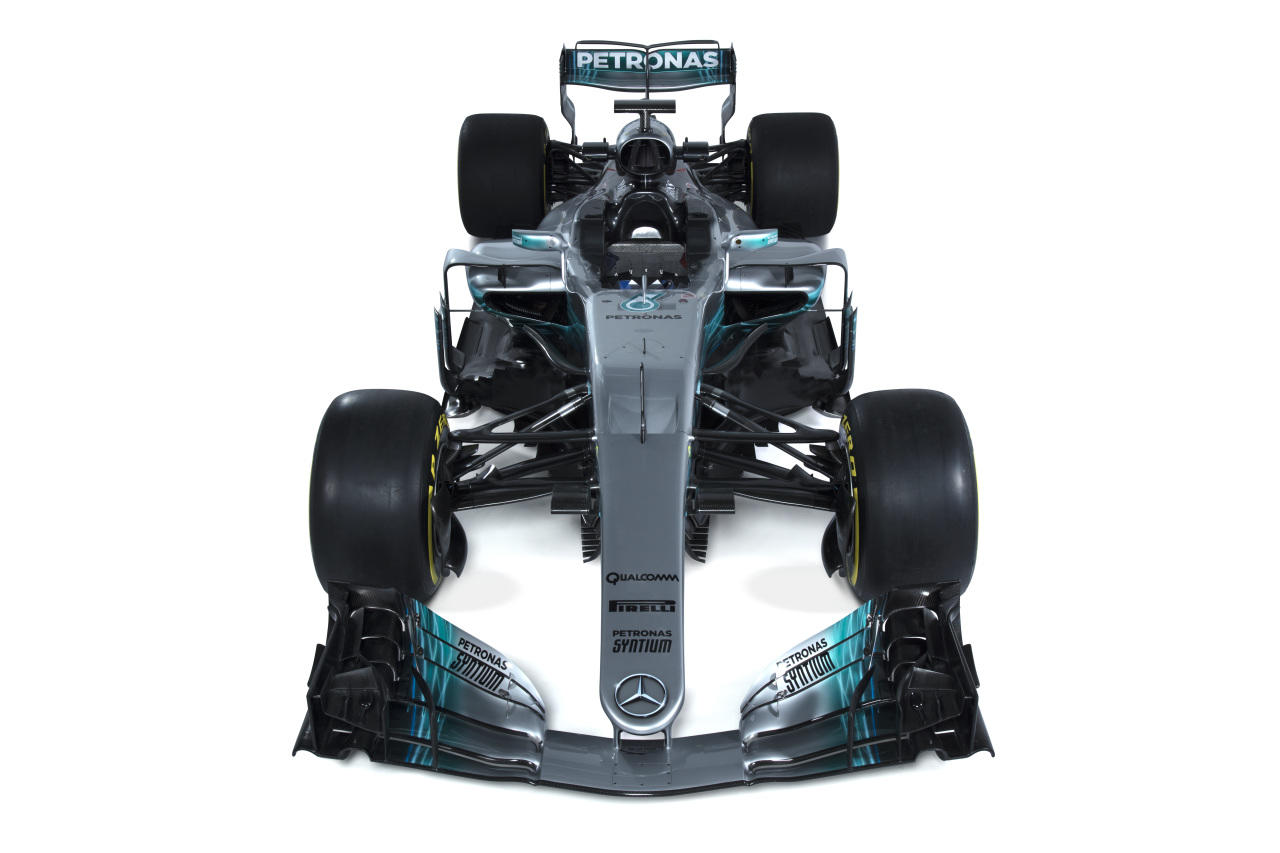 One of the important changes to the 2017 season W08 EQ+ powered car is the delta shaped front wings with 12.5 degree back sweep angle. It features cascade winglets similar to 2016 season. The delta front wings are a regulation change for the 2017 season.

The W08 has a slender nose, shorter camera pods and a new S duct design with deeper grooves and embedded antenna in the middle. The four element turning vanes attached to the new nose design features their own individual footplates that are again divided into a total of seven individual aerofoils. There is also a bommerang shaped fin sitting above the barge-boards. 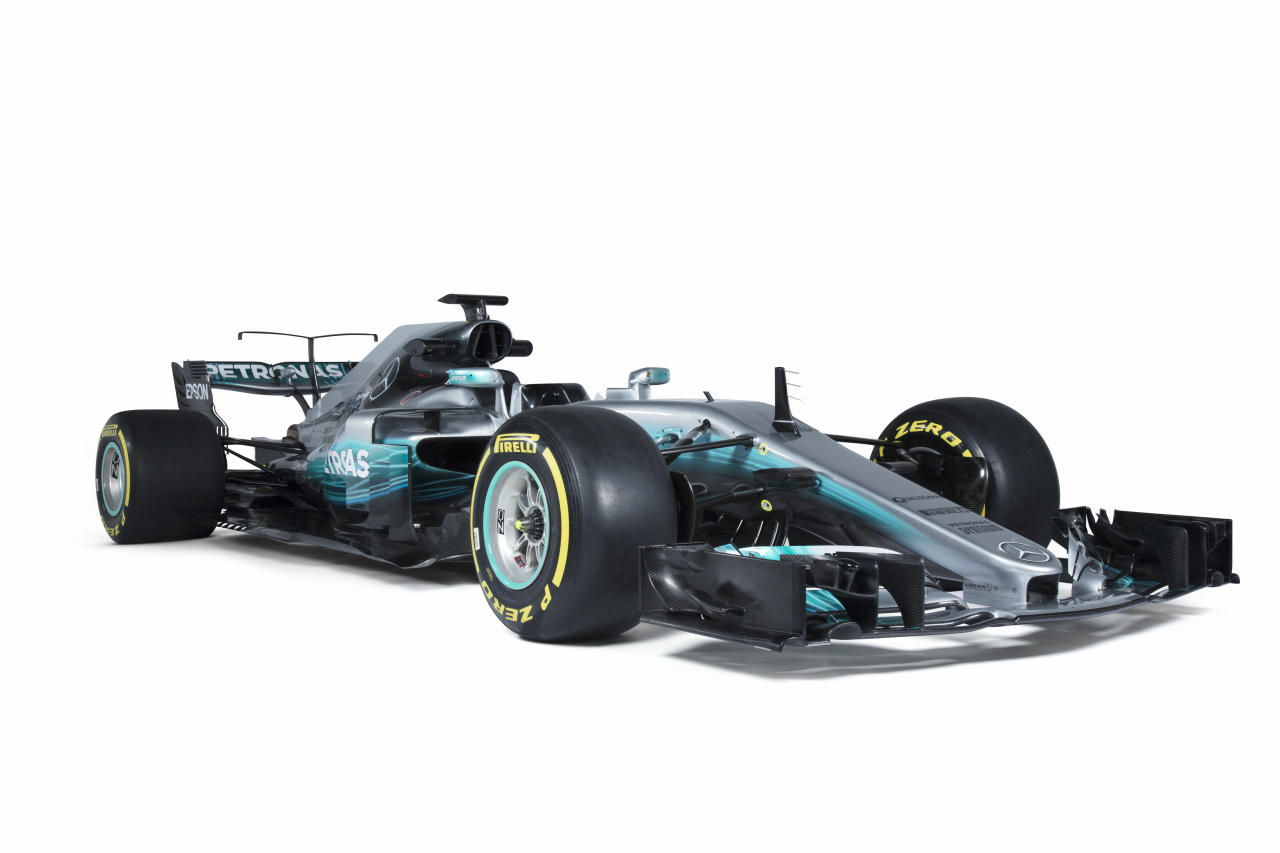 The car also features a taller front suspension by placing the upper wishbone higher. A taller wishbone frees-up space between suspension elements and create cleaner and increased airflow into aerodynamic components behind it.

The primary barge-board occupies almost all of the box area set out by the FIA regulations. It also features a number of perforations along the base to help optimize the airflow and seal off the splitter behind. The perforated body work is designed for creating elongated vortices and optimized surrounding free-flow of air. There is also a more detailed out-sweep floor board design to optimize airflow underneath the car. Another interesting addition to the floor board is a simpler design to displace turbulent airflow by featuring nine perforations ahead of the rear tires. This approach is a relatively simpler design compared to previous years. These floor-board perforations will allow cleaner airflow over the rear tires by preventing the formation of vortices. 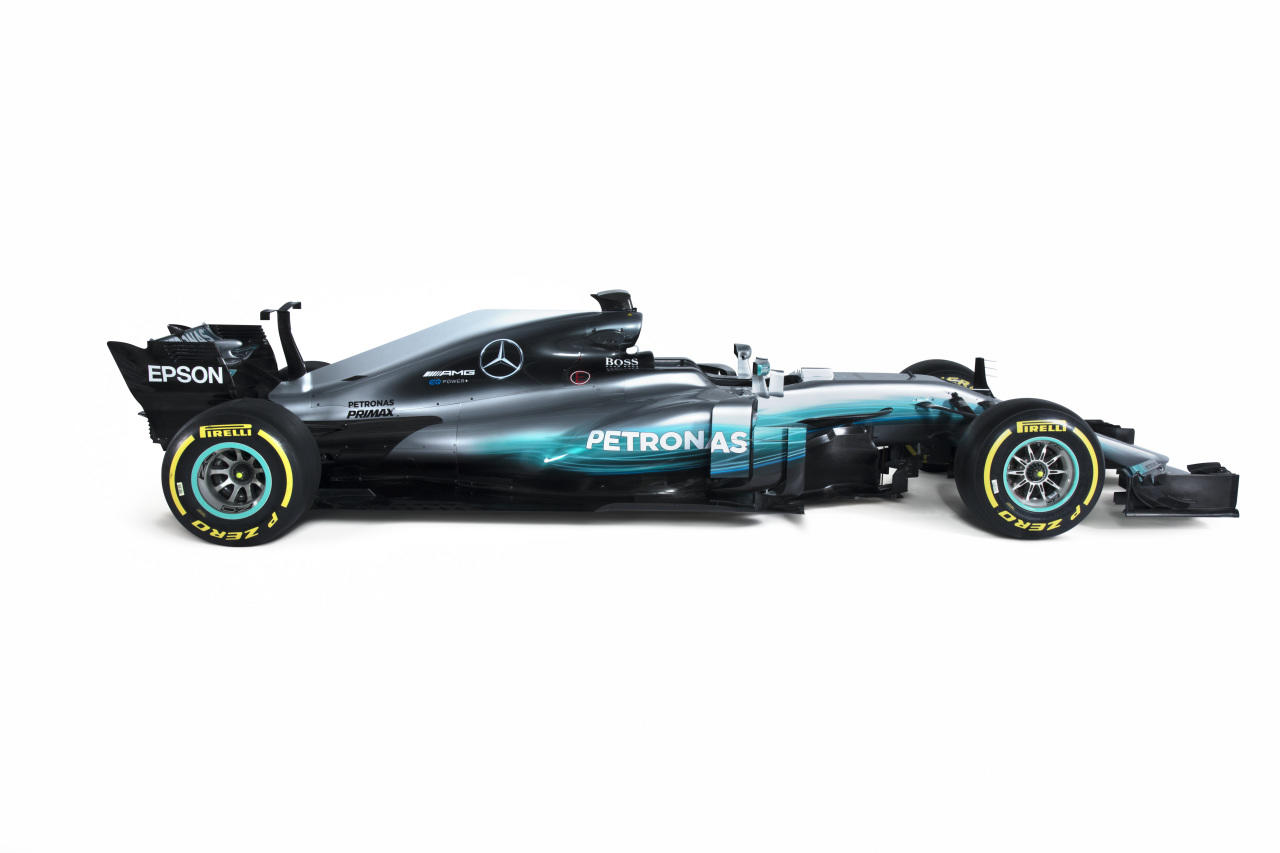 The overall length of the car has been increased by 15 cm. It also features a very big, complexly sculpted vane tower design on either sides of the barge-boards. The side pods are extended for better engine air intake. Since the 2017 design increases the airflow to the engine, I am expecting an increase in the power-output for the otherwise largely unchanged internal combustion design. The side-pods also feature a highly detailed three element flow conditioners for maximizing the deflection of the wake from the side-pod undercuts. 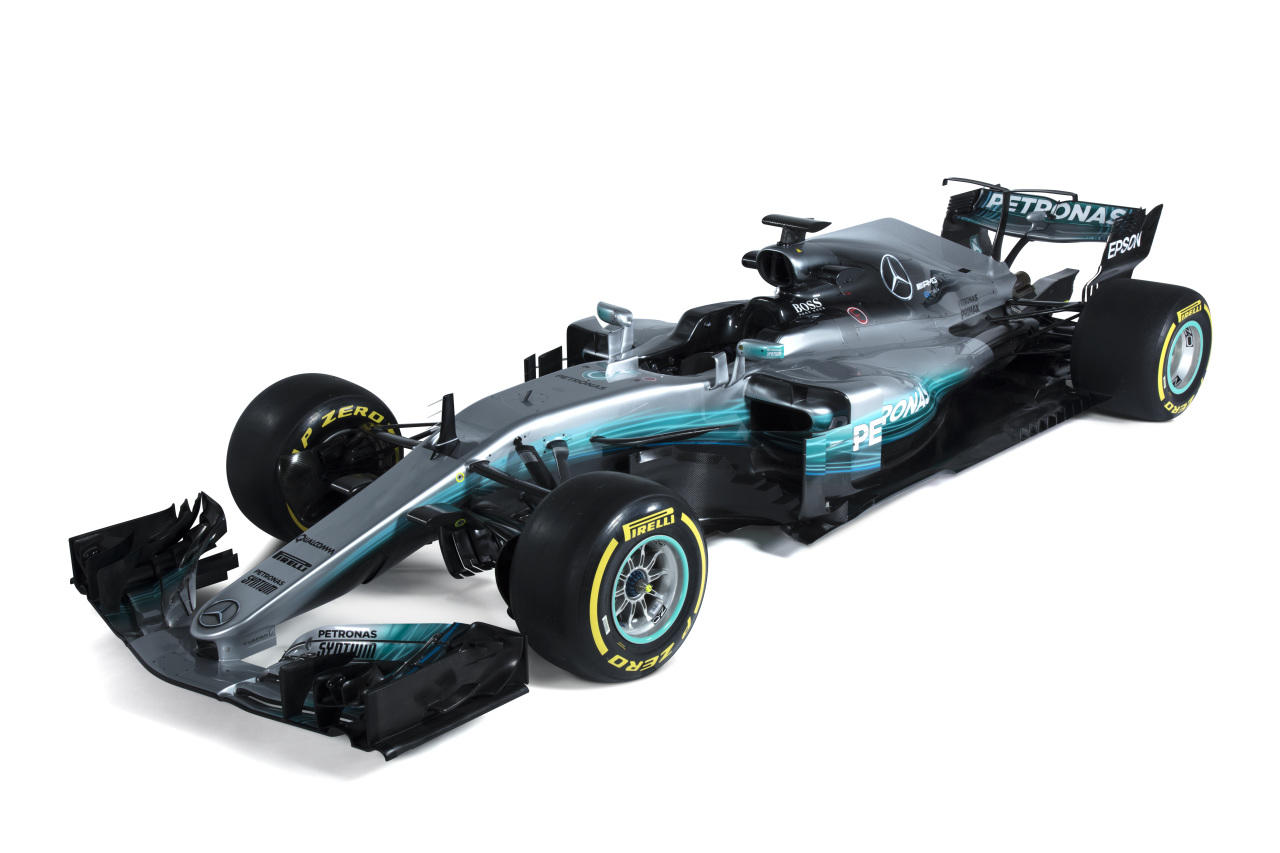 The rear of the car features a FIA regulation mandated slanted, bow shaped rear wing, which is shallower at the tips than at the center. There is also an open leading edge slotted end-plate design for the rear wing. A narrow ‘T-shaped’ mini-wing is also placed ahead of the rear tires. The new wing design and the mini-wing is aimed at making the car more aerodynamically balanced. I am expecting slight changes to the wing design, depending on the nature of the race circuit.

Another area of important changes are to the hybrid power train. Here is a video from the Mercedes team explaining all the significant engine changes for the 2017 season.

According to Andy Cowell, the chief of Mercedes High Performance Powertrains, the new engine features updated high-power switches for better efficiency. The new engine design is aimed at taking advantage of the added down-force and grip with the new aerodynamic design. Since, the full-throttle time is projected to increase for the 2017 races, both engine and motor generator units (MGUs) for energy recovery systems needed the upgrade. The drive cycle change expected for 2017 races have led to the development of a more efficient MGU-H and an updated MGU-K system. I am expecting an increased reliability for the power train. The removal of token system for engine development means there is some room for significant improvement in performance as the season evolves. 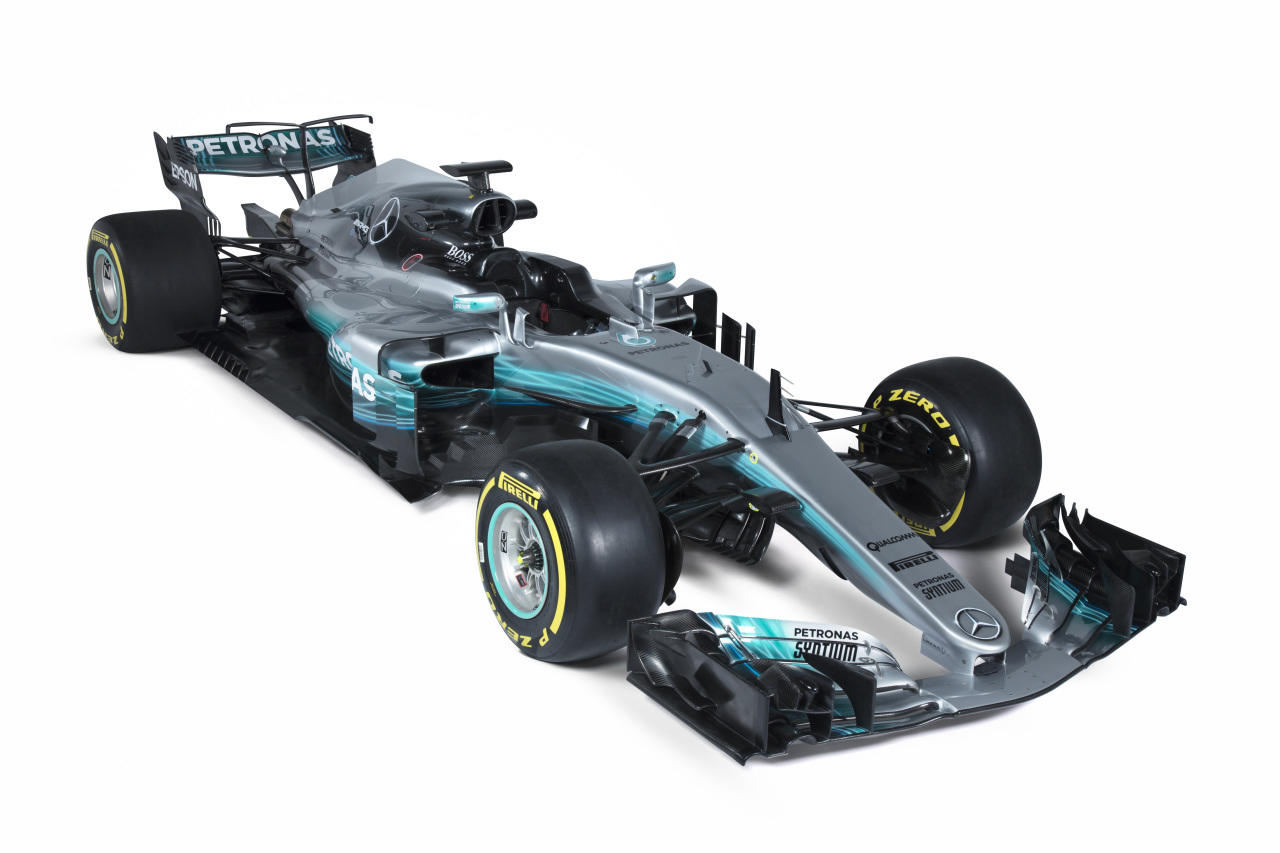 An interesting addition to the new wing mirrors is the integration of infrared cameras for tire temperature monitoring. Mercedes team has been partnering with mobile communication giant Qualcomm. This partnership has made some exciting and significant improvements in telemetry and data acquisition from the new car.

The tires have changed for the 2017 season. The new Pirellis on the W08 are wider than last years, with 305 mm front and 405 mm rear tires. These tires will improve the overall grip. It also allows better transfer of power to the road, which means increased cornering speeds.

With the wider tires, improved aerodynamics for better stability and down-force, and an updated power-train, I am expecting to see a 3 to 3.5 second improvement in lap-times with the new car over 2016 season.

Here is an awesome video from the Mercedes AMG Petronas team featuring their drivers: Lewis Hamilton and Valtteri Bottas.

From the looks of it, team Mercedes has another winning package. Hamilton and Bottas are the two very talented drivers currently in formula one. The 2017 race car has significant improvements from last years in areas that matter. The engineers at Mercedes have managed to retain all the key elements of the W07 car that worked very well for the team last year. The new W08 car features extensive updates, but remains an evolutionary design over last years car. Considering the dominance of W07 over its rivals in the last season, an evolutionary design should work very well for the Mercedes team.

If the early track testings are any indication, the 2017 formula one season is going to be hugely exciting. My bet is on a close Mercedes-Ferrari battle with Mercedes having a slight upper hand.

All photographs featured in this blog post were taken at the Silverstone race circuit 2017 Silver Arrows ‘Collateral Day’ session, Towcester NN12 8TN, UK and photographed by Steve Etherington. The first picture at the beginning of this post features from left to right: Lewis Hamilton, Toto Wolff and Valtteri Bottas, behind a Mercedes AMG Petronas Silver-arrows W08 formula one race car.