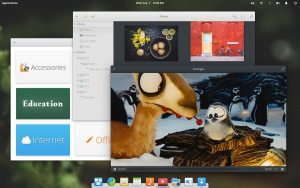 I have decided to migrate all of the programming environments to linux . The reason is simplicity of linux to run Python and R. I am often befuddled by common dependency issues, which linux seems to have avoided. This is especially true for Python. An added advantage is the ability to run very sophisticated deep learning algorithms, including Nvidia Digits and Google Tensorflow. If one is serious about machine learning, embrace linux.

Right now, I am divided between two major linux distros: Ubuntu and Fedora. Ubuntu has the advantage of wider support. Fedora has Project Wayland, which makes Fedora 24 way more secure than any other X-system based linux distros. For now, the decision is a virtual tie. Right now, I am experimenting with a very minimalist Ubuntu based OS, called Elementary.

I initially ran three tensorflow experiments in Elementary. The OS has major issues with Anaconda and Docker. But, since I don’t care much about either of those issues, as long as tensorflow experiments could perform well, I was very happy. The chief attraction of Elementary OS was the distraction free, minimalist UI. Being a Sherlock fan, the name was also a subjective matter of attraction to me.

After two days of experimentation with Elementary, I decided to stick with plain vanilla Ubuntu 16.10. The biggest issue for me was the lack of a stable package manager. A simple Docker installation routine broke the package manager. Then came the errors in tensorflow. The UI is beautiful in Elementary. It is very beginner friendly distro. But, for advanced applications, I have decided to stick with Ubuntu.