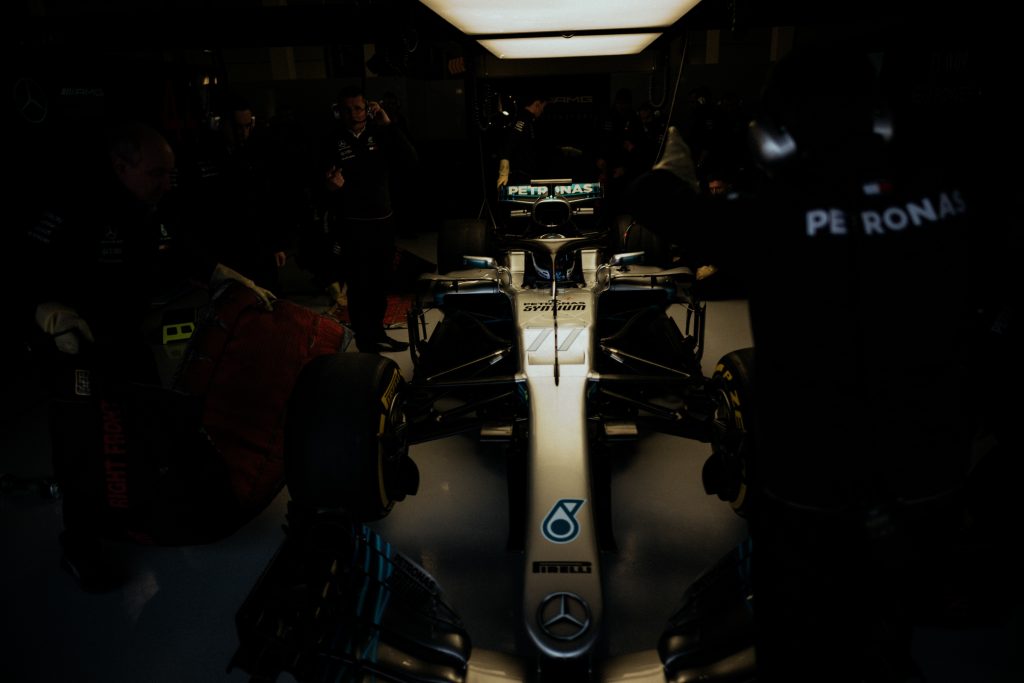 Formula one is back for an all new 2018 season. Teams unveiled their cars in late February. Mercedes announced the W-09, their 2018 competitor on February 22nd 2018. Details about the new car and how the season will evolve is slowly trickling down. After two weeks of winter testing in Barcelona, once again team Mercedes has emerged as a strong favorite for winning the 2018 formula one season. 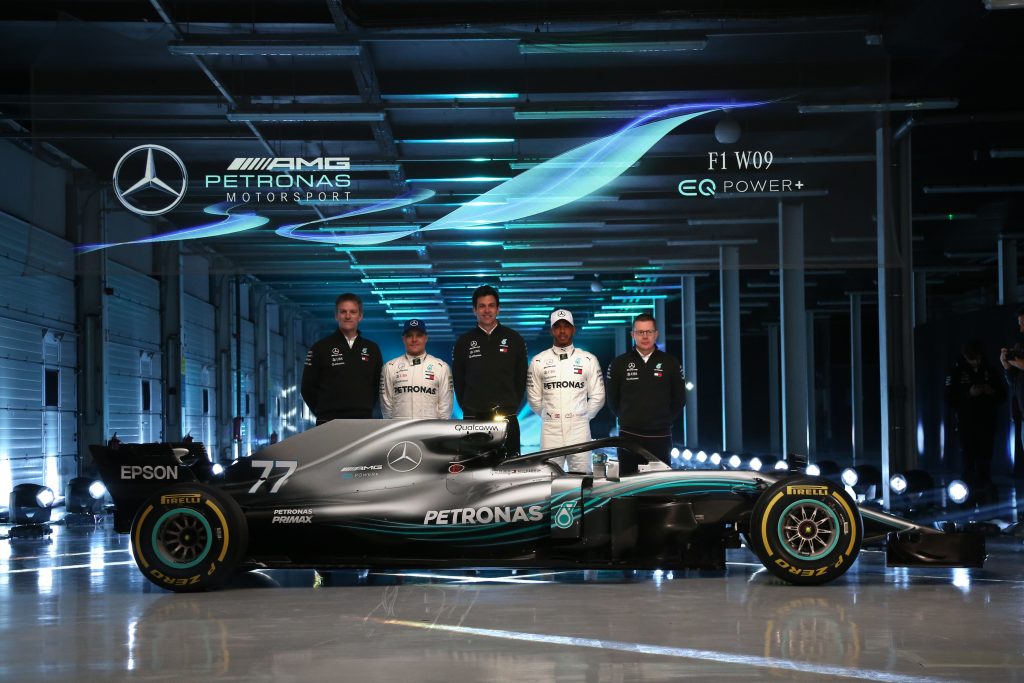 The driver line-up for this year is unchanged from the last. British driver Lewis Hamilton in car 44 and Finnish colleague Valtteri Bottas in car 77. The engineering, manufacturing and management portions of the team has also remained unchanged. Toto Wolff, the executive director of Mercedes AMG Petronas Formula One Team, still leads it. James Allison, is the technical director. Andy Cowell,  the managing director of Mercedes AMG High Performance Powertrains, oversees the engine development. Aldo Costa is still the engineering director for the team. 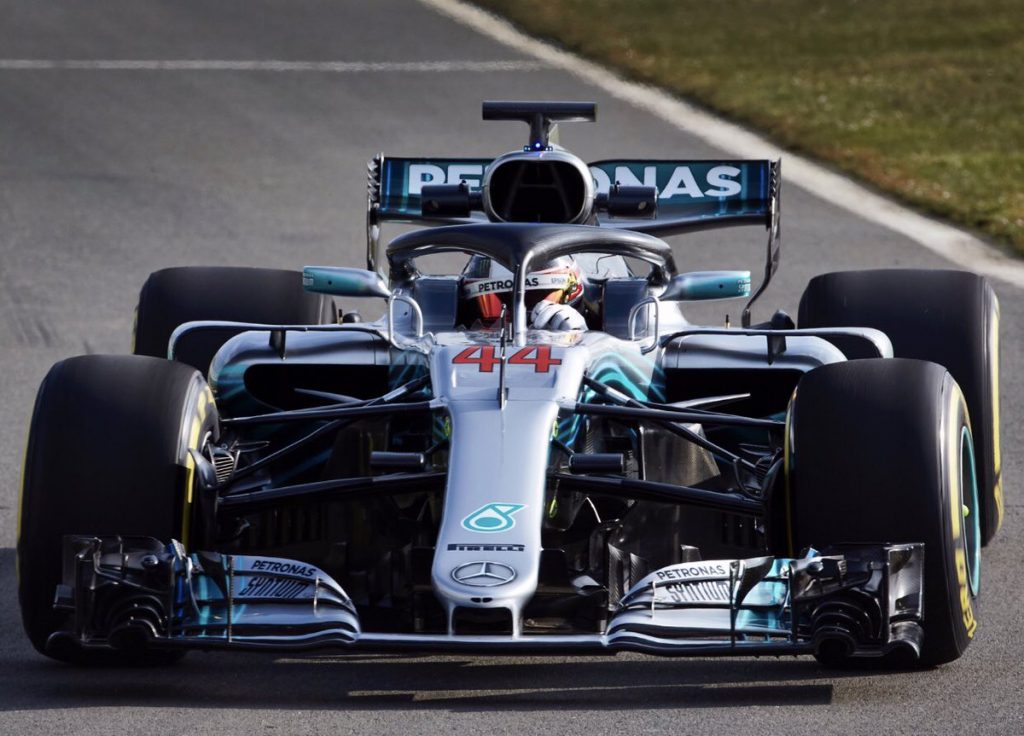 The lack of significant changes in the team has reflected in the new car. From the outside, the W-09 looks like an evolutionary change to last year’s W-08. The W-09 exterior revisions can be broadly categorized into two. One: changes to accommodate the new rules, two: performance and aerodynamic changes. 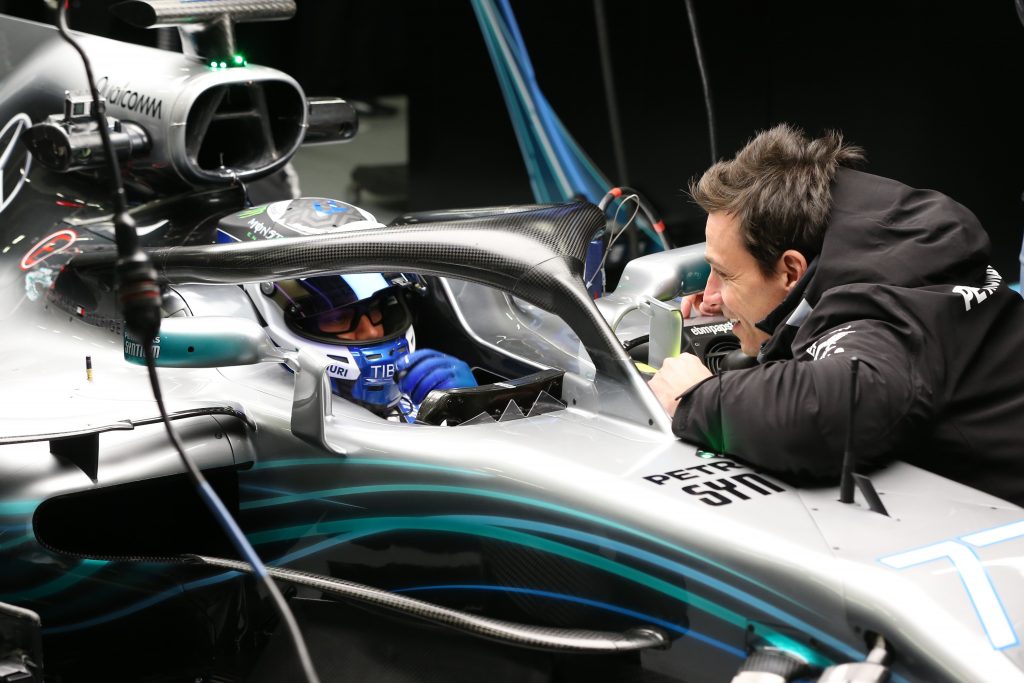 The biggest exterior change to the W-09 is the addition of head protection device called the Halo. The Halo is a carbon fiber structure that sits on top of the driver cage, to protect the driver’s head. The Halo device is meant to prevent the risk of direct impact to the driver’s helmet with flying object like wheels or other parts from another car, in the event of an accident or collision. The addition of Halo device also adds weight to the car, making the new cars approximately 80kg heavier than the last year’s design. 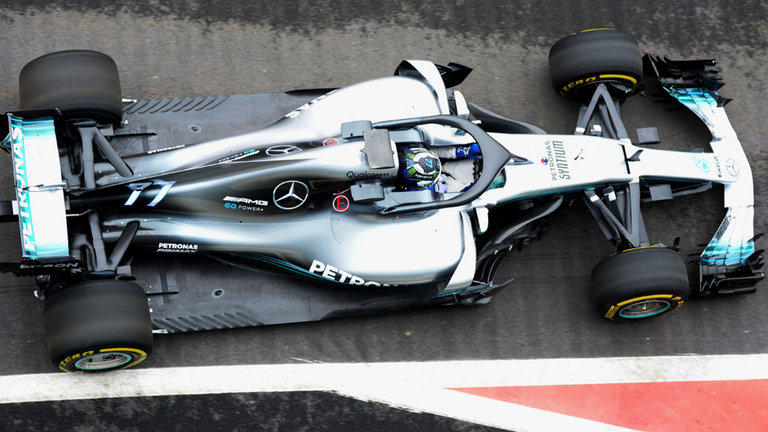 Another major visual change is in the rear of the car. Once again, for 2018 season, the new rules have changed the use of a structure called shark fin. Last year’s cars had a very prominent shark fin. This structure is aimed at managing the aerodynamic vortices formed around the rear of the car. The shark fin acted as a separation layer for airflow between left and right sides. In 2018, the new rules mandate a less prominent shark fin structure on the rear engine cover. Related to the shark fin rule is another change to the rear, that prevents the use of T-wings. T-wings were used last year, in conjunction with the shark fin. These secondary wing structures managed the airflow to the rear wing by modulating it. In 2018, the new rules prevent teams from using those large T-wings. The W-09 incorporates this rule change in the form of a smaller, less prominent T-wing that sits below the big rear wing structure. 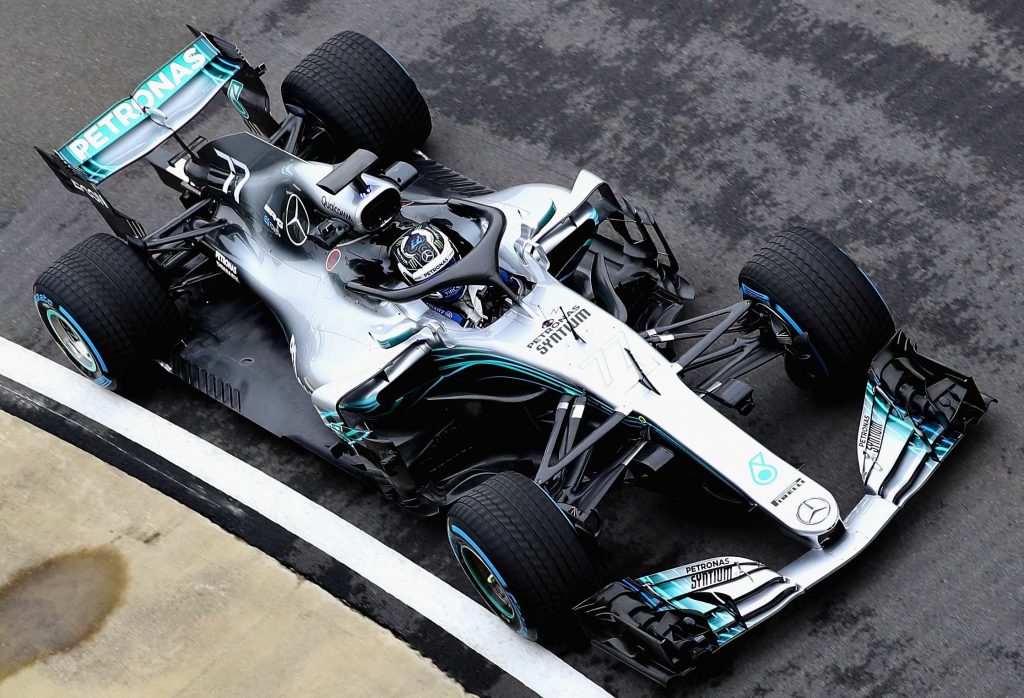 The smaller evolutionary changes to the W-09 are aimed at improving the aerodynamic profile of the car. Last year’s W-08 was often referred to by the team as a “diva”, due to unpredictable handling characteristics. The W-09 design changes are aimed at making the new car more predictable over a wider range of tracks. One of the key features to accomplish this is by incorporating a sculpted, sleek, more aerodynamic side-pod cover and engine cover. This structure has a simpler, smaller aerodynamic profile than last year’s side pod/engine cover design. It also achieves tighter packaging of the powertrain components. 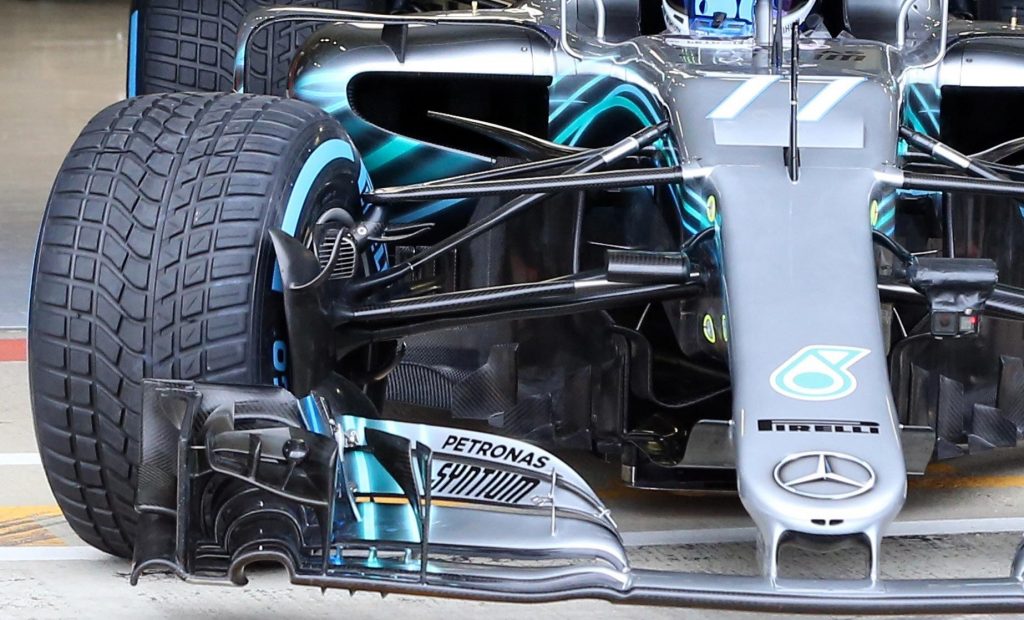 The new car also features a raised front suspension. This allows smoother airflow to the aerodynamic elements behind it. Both the front and rear suspension elements have incorporated slightly revised aerodynamic surfaces to manage airflow over them. In the W-09, the front suspension elements have a simpler airflow profile than those in the last year’s car. The new car also has a bigger and more aerodynamic steering control arm in the front. There is also a bigger air scoop along the bottom of the front nose cone structure, that directs the airflow to the bottom of the car. The W-09 also has a very aggressive rake. These tweaks are all aimed at taming the unpredictability associated with last year’s design. 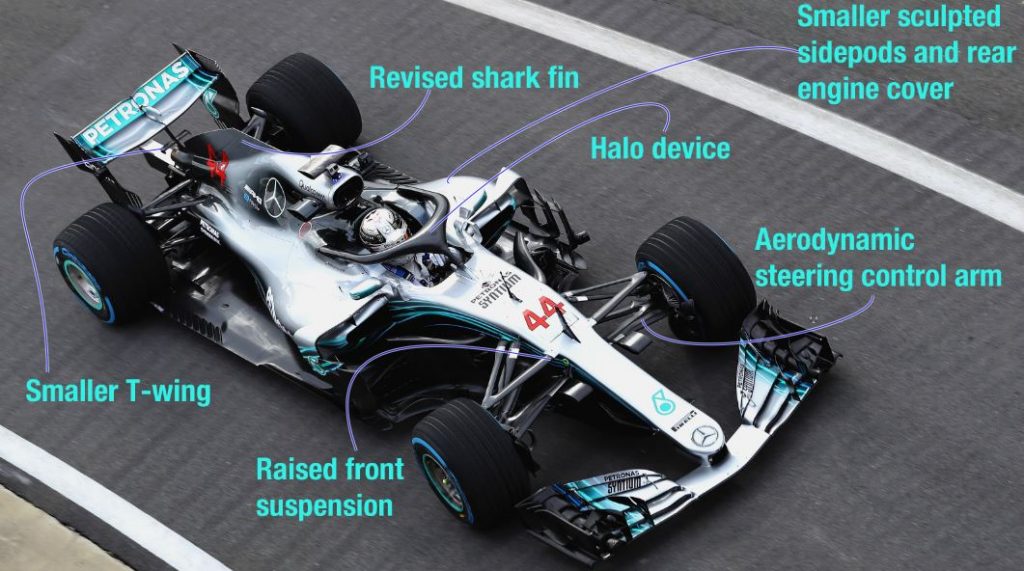 In summary the W-09 design improves upon the W-08 design, a car that won both drivers championship and constructors championship in 2017. The philosophy behind W-09 seems to be simplifying the overall design and making the handling characteristics more predictable. Underneath all these changes, there is the usual reliable Mercedes turbo V6 hybrid powertrain. The reliability and performance of the powertrain will be very important for 2018 season. The regulation changes prevent teams from using more than three engines for the whole season, without incurring penalties. Also, Ferrari and Renault have made good progress over the winter, in improving the performance and reliability of their powertrains. 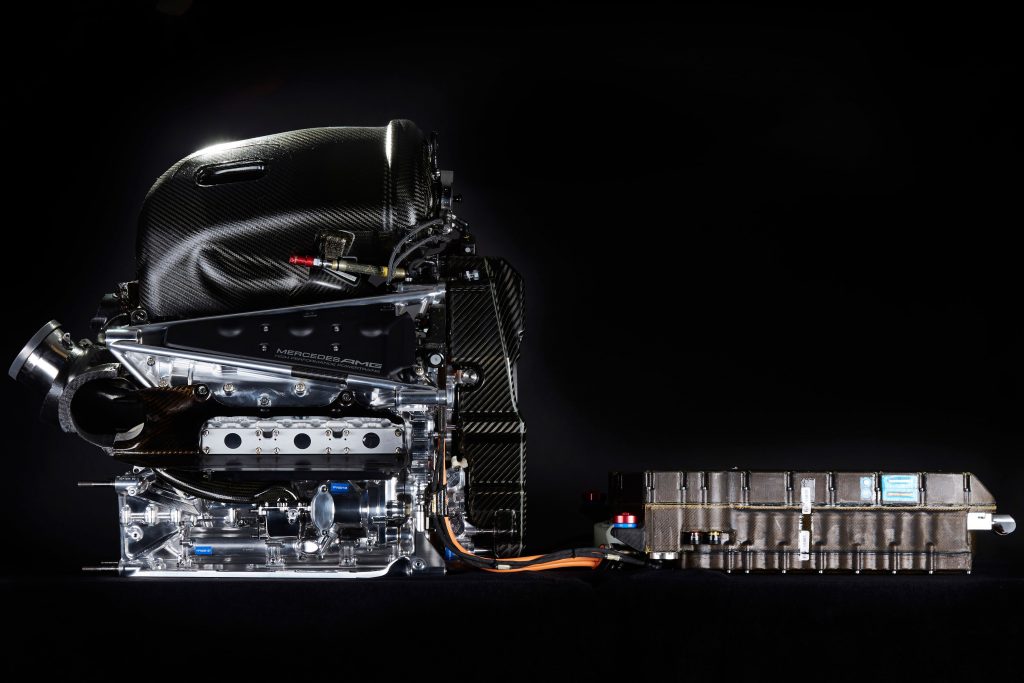 It looks like Andy and his team of engineers overseeing the powertrain development has done an excellent job. Despite tighter packaging, the car has been tested without any major issues. During the winter testing the Mercedes car logged the most amount of testing mileage and demonstrated good overall pace during full-race simulation sessions. Both Lewis and Valtteri are happy with the way the car is handling. The only big unknown for folks outside of the Mercedes team is the qualification potential of the car. 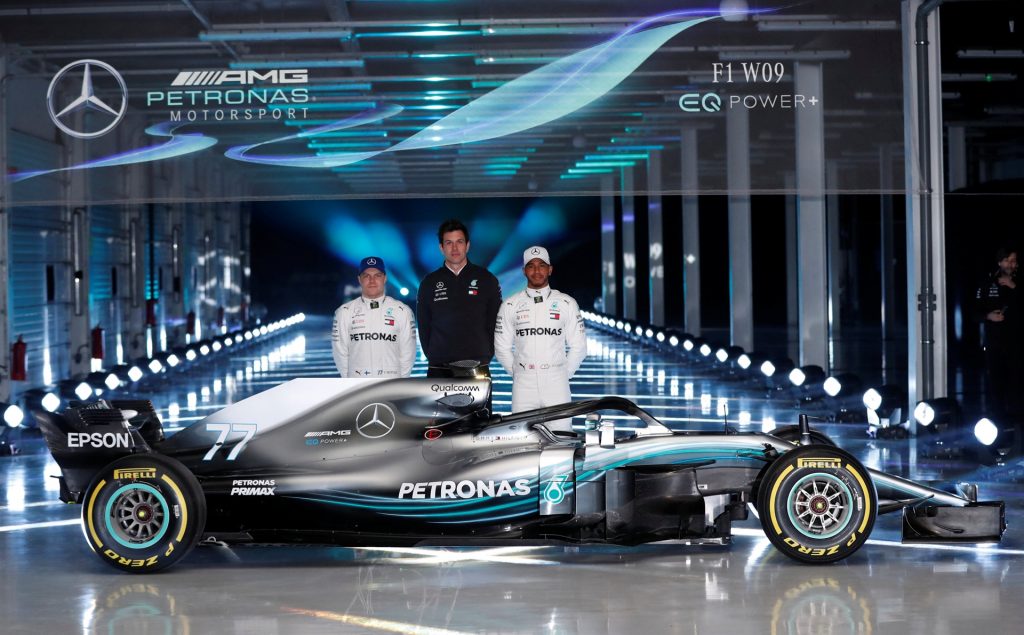 Even though Ferrari topped the time sheets in this year’s winter testing, and the testing numbers are harder to interpret than those from last year, it is safe to assume that the performance of the new Mercedes formula one competitor is something that other teams can’t take for granted. The W-09 is in someways a dark-horse for the 2018 season. Mercedes is the team that has to defend their turf, and it seems like they have created a great package that will do exactly the same. My predictions for the 2018 season are as follows: Lewis Hamilton will win the drivers championship, Valtteri Bottas will be the runner-up and Daniel Ricciardo will be third. Redbull Renault Racing will emerge as the second best team, relegating Ferrari to third place in constructors points.